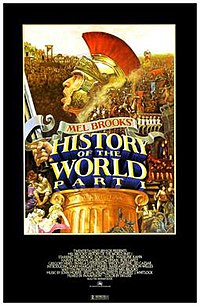 The film, is a parody of the historical spectacular film genre anthology, including the sword and sandal epic and the period costume drama subgenres. The four main segments consist of stories set during the Stone Age, the Roman Empire, the Spanish Inquisition, and the French Revolution. Other intermediate skits include reenactments of the giving of the Ten Commandments and the Last Supper.