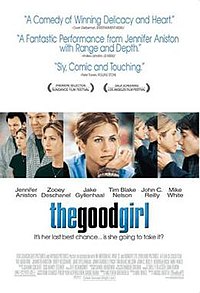 The Good Girl is a 2002 American black comedy-drama film directed by Miguel Arteta from a script by Mike White, and stars Jennifer Aniston, Jake Gyllenhaal and John C. Reilly. The film premiered at the 2002 Sundance Film Festival, and released to theatres on August 7, 2002 in the United States.