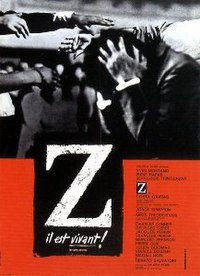 Z is a 1969 Algerian political thriller film, directed by Costa-Gavras, with a screenplay by Gavras and Jorge Semprún, based on the 1966 novel of the same name by Vassilis Vassilikos. The film presents a thinly-fictionalized account of the events surrounding the assassination of the democratic Greek politician Grigoris Lambrakis in 1963. With its dark view of Greek politics and its downbeat ending, the film captures the director's outrage about the junta that then ruled Greece.

The story begins with the closing moments of a rather dull government lecture and slideshow on agricultural policy until the leader of the security police of a right-wing military-dominated government takes over the podium for an impassioned speech describing the government's program to combat leftism by using the metaphors "a mildew of the mind", an infiltration of "isms" and "sunspots".