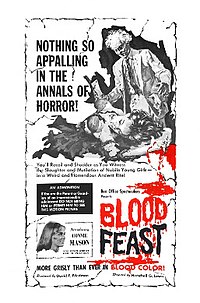 Blood Feast is a 1963 American horror splatter film composed, shot and directed by Herschell Gordon Lewis and starring Mal Arnold, William Kerwin, Connie Mason, and Lyn Bolton. The plot focuses on a psychopathic food caterer named Fuad Ramses (Arnold) who kills women so that he can include their body parts in his meals and perform sacrifices to his "Egyptian goddess" Ishtar. It is considered the first splatter film, and is notable for its groundbreaking depictions of on-screen gore. It was highly successful, grossing $4 million against its minuscule $24,500 budget. The film was followed by a belated sequel, Blood Feast 2: All U Can Eat, in 2002.

In the midst of a series of gruesome murders, a young woman is killed inside her suburban Miami house by a grey-haired, wild-eyed man. He stabs her in the eye and hacks her leg off with a machete, bagging the leg before he leaves. At the police station the next day, detective Pete Thornton investigates the killing, noting that it is the latest in a series of four murders by a homicidal maniac who has yet to leave any clues. The police chief advises him to continue to pursue the case.