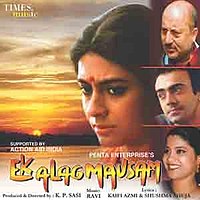 Aparna Verma (Nandita Das), who has been married to a traveling salesman Suresh for several years, is now pregnant. After she completes some medical tests, she is asked to come see the doctor along with her husband. Suresh refuses to go, Aparna goes alone and this is where she receives the news that she has AIDS and she must abort the child. Aparna subsequently learns that Suresh has been having unprotected sex with other women, had acquired AIDS and passed it on to her. She confers with her mother, finds out about a rehabilitation house called "Jivan Jyoti" and goes there to volunteer without telling anyone about her condition. She meets with Dr. Machado (Anupam Kher), who informs her that he is aware of her condition but promises not to tell anyone else. Now divorced, Aparna feels herself getting attracted to another worker, George (Rajit Kapur), who is a truck driver and also works in Jivan Jyoti. George is very friendly with the children of Jivan Jyoti. But the knowledge of her being HIV positive restrains her from getting too friendly with him. She learns that he too is HIV positive. She avoids him and mixes with the children. A prostitute Rita (Renuka Shahane) and her young daughter Paro are brought to Jivan Jyoti. Rita passes away leaving Paro in the care of Aparna. George leaves Jivan Jyoti feeling shunned by Aparna but only after disposing his truck and garage and donating the proceeds for the development of Jivan Jyoti. Aparna takes Paro to a boarding school for admission where she meets George after a long time. They unite with the help of Dr Machado.