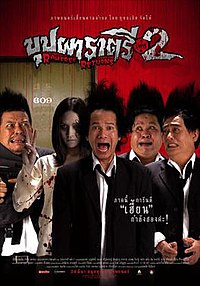 The vengeful female ghost, Buppah, continues to inhabit apartment 609. She shares the room with her ghost boyfriend, Ake, who has been left legless by Buppah after his transgressions in the first film. A blind woman named Thip rents a neighboring apartment. She is due for an eye operation, but the doctor treating her tries to rape her. He is stopped by Rahtree who takes pity upon Thip. Meanwhile, a comic foursome of bank robbers have entered Rahtree's apartment and are using it as a hideout after robbing a bank but find themselves in trouble with Ake and Buppah.