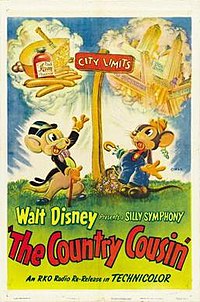 The Country Cousin is a Walt Disney animated short film released on October 31, 1936 by United Artists. The winner of an Oscar at the 9th Academy Awards for Best Animated Short Film, the film was produced by Walt Disney, directed by Wilfred Jackson, and animated by Art Babbitt and Les Clark. As is true for most cartoons in the Silly Symphonies series, The Country Cousin was built around a musical score, which was written by Leigh Harline. The film's story was based on one of Aesop's Fables, The Town Mouse and the Country Mouse. It was accompanied by a storybook for young children, which was common for many of the Silly Symphonies.

The Country Cousin tells the story of a mouse from "Podunk" (an American English name denoting a place "in the middle of nowhere") coming to visit his relative in the city. The opening shot/title card is of the mouse in question, Abner, staring up at the city skyscrapers, with the sign directing him to Podunk facing the opposite way. He receives a telegram (titled a "Mouse-O-Gram") from his cousin, Monty, telling him to "Stop being a hick" and come live with him in the city. Without specifying the location of Abner or Monty, the film sets out to contrast the lifestyles of the archetypal country and city inhabitants.