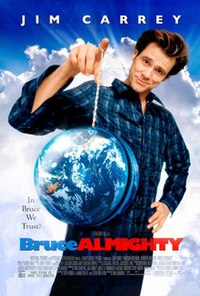 Bruce Almighty (or stylized as BruceALMIGHTY) is a 2003 American fantasy comedy film directed by Tom Shadyac and written by Steve Koren, Mark O'Keefe and Steve Oedekerk. The film stars Jim Carrey as Bruce Nolan, a down-on-his-luck television reporter who complains to God (played by Morgan Freeman) that he is not doing his job correctly and is offered the chance to try being God himself for one week. The film is Shadyac and Carrey's third collaboration, as they had worked together previously on Ace Ventura: Pet Detective in 1994 and Liar Liar in 1997—the second of three collaborations between Carrey and Baker Hall after The Truman Show in 1998 and the next being Mr. Popper's Penguins in 2011. It co-stars Jennifer Aniston, Philip Baker Hall and Steve Carell.

Bruce Nolan is a television field reporter for Eyewitness News on WKBW-TV in Buffalo, New York, but desires to be the news anchorman. When Bruce is passed over for promotion by his rival, Evan Baxter, a vulgar on-camera outburst leads to his dismissal from the station. After a series of misfortunes, Bruce complains to God that "He's the one that should be fired".