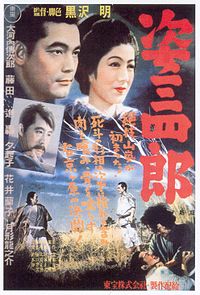 is a 1943 Japanese action drama film and the directorial debut of the Japanese film director Akira Kurosawa. First released in Japan on 25 March 1943 by Toho film studios, the film was eventually released in the United States on 28 April 1974. The film is based on the novel of the same name written by Tsuneo Tomita, the son of prominent judoka Tsunejirō Tomita. It follows the story of Sanshiro, a talented though willful youth, who travels to the city in order to learn Jujutsu. However, upon his arrival he discovers a new form of self-defence: Judo. The main character is based on Saigō Shirō.

In 1883, Sanshiro is a talented though willful youth who wishes to become a jujutsu master by becoming a student at one of the city's martial arts schools. His first attempts to find a suitable instructor fail, until he finally finds an accomplished master, Shogoro Yano from the Shudokan Judo school. Initially, Sanshiro is physically capable though he lacks any type of poise or reflection concerning his self-control and demeanor, and gets involved with brawls. However, after a grueling punishment set by his instructor to test his endurance by leaving him on a cold swamp overnight, Sanshiro begins to recognize the error in his ways and starts to appreciate that there is more to his life and to his art than simple muscle and brawn. Sanshiro becomes a leading student in his school.