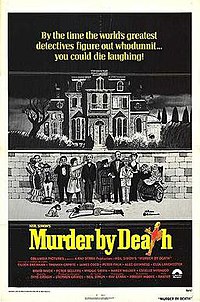 A group of five renowned detectives, each accompanied by a relative or associate, is invited to "dinner and a murder" by the mysterious Lionel Twain. Having lured his guests to his mansion managed by a blind butler named Jamessir Bensonmum, who is later joined by a deaf, mute, and illiterate cook named Yetta, Twain joins his guests at dinner. He presses a button which seals off the house. Twain announces that he is the greatest criminologist in the world. To prove his claim, he challenges the guests to solve a murder that will occur at midnight; a reward of $1 million will be presented to the winner.