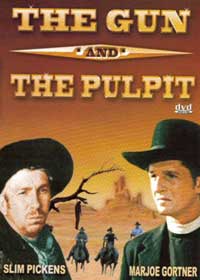 The Gun and the Pulpit is a 1974 American television film directed by Daniel Petrie. It was based on Jack Ehrlich's 1972 novel The Fastest Gun in the Pulpit. Filmed at Old Tucson, it was a television pilot for a series to star former evangelist Marjoe Gortner.

Gunfighter Ernie Parsons escapes hanging for the killing of a disreputable character by the false testimony of a woman attracted to him. During his escape, he finds the body of a murdered minister. Searching the corpse, Ernie discovers a letter from a town who have invited the deceased man sight unseen to be their town minister. Ernie appropriates the victim's clothes and belongings to escape his pursuers and vows revenge on the minister's murderer.