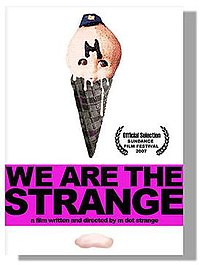 We Are the Strange is an independent animated film directed by M dot Strange. It uses stop motion, CG artwork, and greenscreen effects. The film premiered on January 19, 2007 at the Sundance Film Festival.

We Are the Strange focuses on "two diametrically opposed outcasts" as they "fight for survival in a sinister fantasy world." These two outcasts are an abused woman named Blue who has a mysterious degenerative disease and a living doll named eMMM.