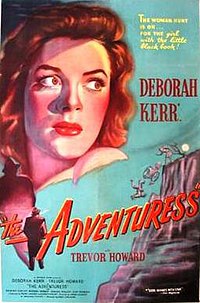 I See a Dark Stranger released as The Adventuress in the United States is a 1946 British World War II spy film with touches of light comedy, by the team of Frank Launder and Sidney Gilliat, and starring Deborah Kerr and Trevor Howard.

In May 1944, during World War II, when a nationalistic young Irish woman, Bridie Quilty (Deborah Kerr), turns 21, she sets out to fulfil a lifelong dream engendered by listening to her late father's stories of the Irish Revolution. She leaves her small rural village and goes to Dublin. On the way, she shares a train compartment with J. Miller (Raymond Huntley), but believing him to be English, she is very brusque with him. Once in the city, she seeks out a famous ex-radical her father had supposedly fought alongside, Michael O'Callaghan (Brefni O'Rorke), and asks him to help her join the Irish Republican Army. However, he has mellowed as the situation in Ireland has improved and tries unsuccessfully to dissuade her from her overly romantic notion.