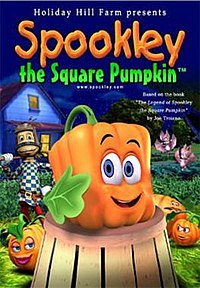 Two bats who live at Holiday Hill Farm, bug-eating Boris and bug-loving vegetarian Bella, discover an unusual sight in the pumpkin patch and rush to inform the farm's scarecrow, Jack, of their find: a young, innocent and square pumpkin, who identifies himself as Spookley. Jack takes a liking to Spookley, but Little Tom, a small pumpkin attached by a vine to the much larger Big Tom, immediately begins bullying Spookley and says only round pumpkins are real pumpkins. Jack quickly puts a stop to Little Tom's teasing.