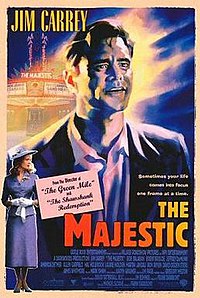 The Majestic is a 2001 American romantic period drama film directed and produced by Frank Darabont, written by Michael Sloane, and starring Jim Carrey in the title role, Bob Balaban, Brent Briscoe, Jeffrey DeMunn, Amanda Detmer, Allen Garfield, Hal Holbrook, Laurie Holden, Martin Landau, Ron Rifkin, David Ogden Stiers, and James Whitmore. The film details a 1951 Hollywood screenwriter suspected of being a communist who suffers amnesia in a car accident and is taken in by the people of a local town who mistake him as one of their own who went MIA during World War II.

In 1951, in the midst of the Second Red Scare, Peter Appleton is an up-and-coming young screenwriter in Hollywood. He learns from studio lawyer Leo Kubelsky and his own attorney Kevin Bannerman that he has been accused of being a communist, because he attended an antiwar meeting in his college years, a meeting he claims he only attended to impress a girl.