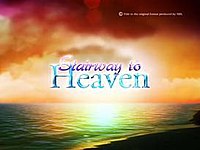 Stairway to Heaven is a 2009 Philippine television drama romance series broadcast by GMA Network. The series is based on a 2003 South Korean television series of the same title. Directed by Joyce E. Bernal, Andoy Ranay and Mac Alejandre, it stars Dingdong Dantes and Rhian Ramos. It premiered on September 14, 2009 on the network's Telebabad line up replacing Adik Sa'Yo. The series concluded on December 11, 2009 with a total of 65 episodes.