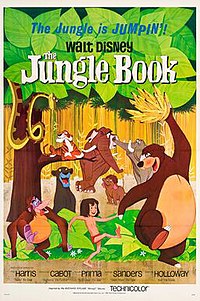 The Jungle Book is a 1967 American animated musical comedy film produced by Walt Disney Productions. Based on Rudyard Kipling's 1894 book of the same name, it is the 19th Disney animated feature film. Directed by Wolfgang Reitherman, it was the last film to be produced by Walt Disney, who died during its production. The plot follows Mowgli, a feral child raised in the Indian jungle by wolves, as his friends Bagheera the panther and Baloo the bear try to convince him to leave the jungle before the evil tiger Shere Khan arrives.

Mowgli, a young orphan boy, is found in a basket in the deep jungles of India by Bagheera, a black panther who promptly takes him to Raksha, a mother wolf who has just had cubs. She and her mate, Rama, raise him along with their own cubs and after ten years, Mowgli becomes well acquainted with jungle life and plays with his wolf siblings. Bagheera is pleased with how happy Mowgli is now, but also worries that Mowgli must eventually return to his own kind.