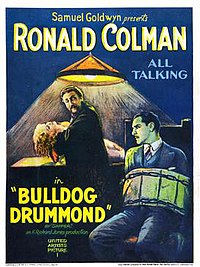 Hugh "Bulldog" Drummond, a demobilised British captain bored with civilian life, places a personal advertisement in The Times offering his services for "any excitement". One of the many replies intrigues him: Phyllis Benton claims she is in great danger. He immediately sets out for the Green Bay Inn, where she has reserved some rooms for him. Unable to persuade him to give up this mad adventure, his friend Algy Longworth follows after, dragging Drummond's valet, Danny, along.