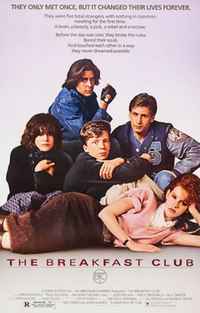 On Saturday, March 24, 1984, five students at the fictional Shermer High School report at 7:00a.m. for all-day detention. Each comes from a different clique: Claire Standish, a snobbish beauty; Brian Johnson, a brainiac; Andrew Clark, a wrestler; John Bender, a rebel; and Allison Reynolds, a shy girl with unusual behaviour. They gather in the school library, where Assistant Principal Richard Vernon instructs them not to talk, move from their seats, or sleep until they are released at 4:00p.m. He assigns them a thousand-word essay, in which each must describe "who you think you are". He leaves, returning only occasionally to check on them.