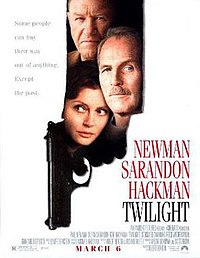 Aging private detective Harry Ross (Newman), an ex-cop, is working on a case to return 17-year-old runaway Mel Ames (Witherspoon) to her parents' home. He tracks down Mel and her sleazy boyfriend, Jeff Willis (Schreiber), at a Mexican resort. During a struggle, Mel accidentally shoots Harry with his pistol, striking him in the upper thigh.