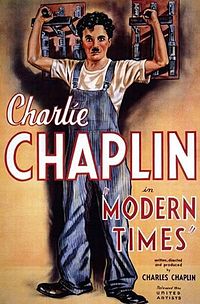 Modern Times is a 1936 American silent comedy film written and directed by Charlie Chaplin in which his iconic Little Tramp character struggles to survive in the modern, industrialized world. The film is a comment on the desperate employment and financial conditions many people faced during the Great Depression — conditions created, in Chaplin's view, by the efficiencies of modern industrialization. The movie stars Chaplin, Paulette Goddard, Henry Bergman, Tiny Sandford and Chester Conklin. It is notable for being the last time that Chaplin portrayed the Tramp character and for being the first time Chaplin's voice is heard on film.

Modern Times portrays Chaplin in his Tramp persona as a factory worker employed on an assembly line. There, he is subjected to such indignities as being force-fed by a malfunctioning "feeding machine" and an accelerating assembly line where he screws nuts at an ever-increasing rate onto pieces of machinery. He finally suffers a nervous breakdown and runs amok; getting stuck within a machine and throwing the factory into chaos. He is sent to a hospital. Following his recovery, the now unemployed factory worker is mistakenly arrested as an instigator in a Communist demonstration. In jail, he accidentally ingests smuggled cocaine, mistaking it for salt. In his subsequent delirium, he avoids being put back in his cell. When he returns, he stumbles upon a jailbreak and knocks the convicts unconscious. He is hailed as a hero and given special treatment. When he is informed that he will soon be released due to his heroic actions, he argues unsuccessfully that he prefers life in jail.