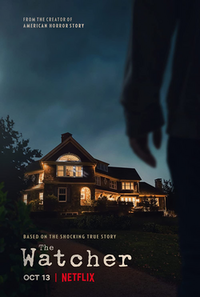 The Watcher is an American mystery thriller television series created by Ryan Murphy and Ian Brennan for Netflix. It premiered on October 13, 2022. It is loosely based on a 2018 article for New York "The Cut" by Reeves Wiedeman. Despite being originally conceived as a miniseries the series was renewed for a second season in November 2022.

The series follows a married couple who, after moving into their dream home in a fictionalized version of Westfield, New Jersey, are harassed by letters signed by a stalker who goes by the pseudonym "The Watcher".