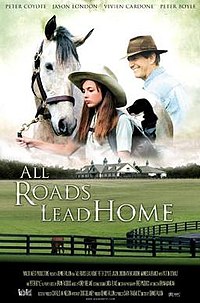 The story is about a 12-year-old girl, Belle, who loses her mother in a car accident. She is sent to her grandfather's house for releasing all of the kennel dogs where her father works. When the animals start to get sick and die in Belle's hometown, her father's veterinarian girlfriend struggles to find out what is killing the healthy animals. When Belle's father and his girlfriend visit, Belle's dog attacks the grandfather's farmhand Basham. Because Belle is now running the farm, she decides the dog should be put to death because that is what she learned on the farm. Belle learns this after running away with one of her grandfather’s horses, two puppies, and the dog she will later decide to euthanize. Belle almost dies while running away in the middle of a torrential downpour when she slips and falls and on a pair of railroad tracks while a train approaches. Luckily, Basham saves her. When the dog is about to die, it is discovered that the food Basham was carrying contained a lethal mold that was killing the animals. The vet goes to the factory where the food was made and fixes the problem, ending the dog epidemic. Then, Belle's rich grandfather has an inn turned into a no-kill animal shelter.