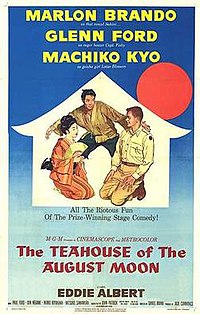 The Teahouse of the August Moon 1956

The Teahouse of the August Moon is a 1956 American comedy film directed by Daniel Mann and starring Marlon Brando. It satirizes the U.S. occupation and Americanization of the island of Okinawa following the end of World War II in 1945.

Misfit Captain Fisby (Glenn Ford) is sent to Americanize the village of Tobiki on Okinawa, the largest of the Ryukyu Islands. His commanding officer, Colonel Wainwright Purdy III (Paul Ford), assigns him a wily local, Sakini (Marlon Brando), as interpreter.