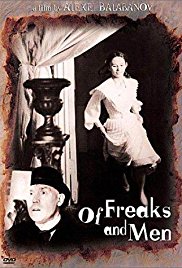 Of Freaks and Men is a 1998 Russian film directed by Aleksei Balabanov.

Filmed initially in black and white, then entirely in sepia tone, this film set in turn of the century Russia is centered on two families and their decline at the hands of one man, Johann, and his pornographic endeavours. Hailed by some as a masterpiece, the movie comments on the decline of Russian society as a result of the rise of capitalism.