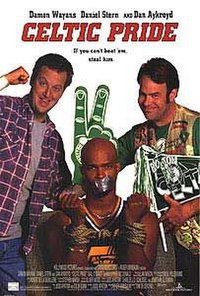 Best friends for life, physical education teacher Mike O'Hara and plumber Jimmy Flaherty are united by their love of Boston and its sports teams, especially the Boston Celtics, who are playing their last season in the old Boston Garden. When the Celtics drop Game 6 of the NBA Finals to the Utah Jazz, setting up a deciding Game 7 in Boston, Mike and Jimmy find themselves depressed and hopeless. On top of all this, Mike has moved back in with Jimmy after his wife Carol, fed up with his unhealthy obsession with the Celtics, left him and took their son Tommy with her. Jimmy and Mike stumble upon the Jazz's selfish, one-man-show shooting guard Lewis Scott at a Boston nightclub. Hoping at first to get him drunk enough so he'll be hungover for Game 7, Mike and Jimmy pose as Utah fans. This however leads to them running into their idol Larry Bird, who scolds them for being what he thinks are "fair weather" fans. However, the pair get more than they bargained for when the next morning they end up kidnapping Scott after he wakes up at Jimmy's apartment. The two decide to hold Scott until after the game, reasoning that if they are going to prison, they might as well help the Celtics win in the meantime.