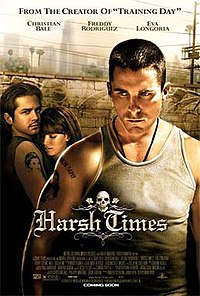 Harsh Times is a 2005 American action crime film set in South Central Los Angeles. The film stars Christian Bale and Freddy Rodriguez, and was written and directed by David Ayer. The film was distributed by Metro-Goldwyn-Mayer and Bauer Martinez Entertainment. Ayer says that the film's characters are largely based on the people he knew when he lived in South Central.

Jim Davis (Christian Bale) is a former U.S. Army Ranger who suffers from posttraumatic stress disorder. Jim has a Mexican girlfriend, Marta (Tammy Trull), whom he is determined to marry and bring into the United States to start a life together. With this in mind, Jim returns to Los Angeles, California.