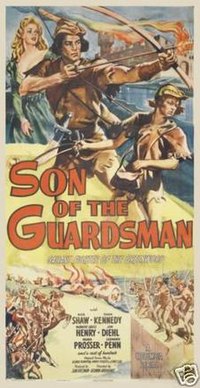 Son of the Guardsman is a 1946 Columbia film serial. It was the 31st of the 57 serials produced by that studio.

Set in the High Middle Ages, Sir Edgar Bullard conspires to conquer England. In doing so, he kidnaps the daughter of his rival, Lord Markham. This causes his nephew, David Trent, to turn against him and join the outlaws in Sherwood Forest, who are led by Allan Hawk. Meanwhile, the outlaws of the forest support Prince Richard as the rightful ruler of England, who has been usurped by the regent Lord Hampton.