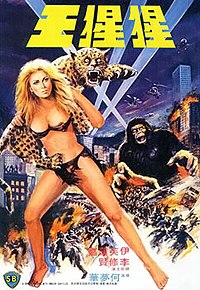 The Mighty Peking Man (猩猩王) (Mandarin: Xingxing Wang - which translates to "Gorilla King" in English) is a 1977 monster film produced by Shaw Brothers Studio to capitalize on the craze surrounding the 1976 remake of King Kong. The film was originally released in the United states with the English dub in 1980 as Goliathon.

A party from Hong Kong headed up by Johnny (Danny Lee) are exploring the Indian side of the Himalayan mountains and discover the eponymous Peking Man, a Yeti, along with a beautiful blonde wild woman named Samantha (Evelyne Kraft) whose parents had been killed in a plane crash. Samantha was raised by Utam (the Peking Man) with nothing to wear but an animal-skin bikini. Like Tarzan, she has learned both to swing through the trees on vines and to communicate with and command the jungle animals, with the exception of a venomous snake who bites her on the inner thigh, requiring the hero Johnny to suck out the poison while Samantha's leopard friend and Utam fight the snake. Shortly thereafter, they fall in love.