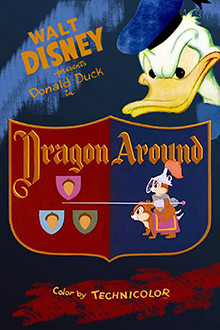 Chip and Dale think they see a dragon coming toward their tree. It's really just Donald with a power shovel, clearing the way for a freeway, but he decides to play along, fitting a welding torch to the jaws for an appropriate flame. Ultimately, with help from a large boulder, a convenient barrel of tar, and some fast wrench work, the two little rodents win.