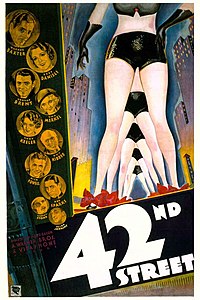 42nd Street is a 1933 American pre-Code musical film directed by Lloyd Bacon and starring Warner Baxter, Bebe Daniels, George Brent, Ruby Keeler, Dick Powell and Ginger Rogers. The choreography was staged by Busby Berkeley. The songs were written by Harry Warren (music) and Al Dubin (lyrics). The script was written by Rian James and James Seymour, with Whitney Bolton, who was not credited, from the 1932 novel of the same name by Bradford Ropes.

It is 1932, the depth of the Depression, and noted Broadway producers Jones and Barry are putting on Pretty Lady, a musical starring Dorothy Brock. She is involved with wealthy Abner Dillon, the show's "angel" (financial backer), but while she is busy keeping him both hooked and at arm's length, she is secretly seeing her old vaudeville partner, out-of-work Pat Denning.