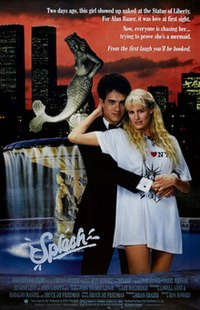 Splash is a 1984 American fantasy romantic comedy film directed by Ron Howard, written by Lowell Ganz and Babaloo Mandel, and starring Tom Hanks, Daryl Hannah, John Candy, and Eugene Levy. It involves a young man who falls in love with a mysterious woman who is secretly a mermaid. It was nominated for an Academy Award for Best Original Screenplay.

In 1964, eight-year-old Allen Bauer (David Kreps) is vacationing with his family near Cape Cod. While taking a sight-seeing tour on a small boat, he sees something below the ocean surface that fascinates him, and jumps into the water even though he cannot swim. Underwater, he encounters a mermaid girl (Shayla Mackarvich) and inexplicably finds himself able to breathe under water. However, Allen is pulled back to the surface, and the two are separated. Since no one else has seen the girl, Allen comes to believe the encounter was a near-death hallucination, but his subsequent relationships with women fail as he subconsciously seeks the connection he felt with the mysterious girl.