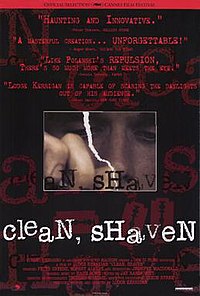 Clean, Shaven is a 1993 film written, produced and directed by Lodge Kerrigan, in which Peter Winter (played by Peter Greene) is a schizophrenic man desperately trying to get his daughter back from her adoptive mother. The film tries to subjectively view schizophrenia and those who are affected by it.

The film begins with abstract images and sounds in the director's interpretation of schizophrenia. Peter Winter has recently been released from a mental institution and upon his release, must try to experience and understand a world that is all but foreign to him.