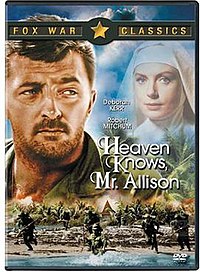 Heaven Knows, Mr. Allison is a 1957 DeLuxe Color, a CinemaScope film which tells the story of two people stranded on a Japanese-occupied island in the Pacific Ocean during World War II.

In the South Pacific in 1944, U.S. Marine Corporal Allison (Robert Mitchum) and his reconnaissance party had been in the process of disembarking from a U.S. Navy submarine when they were discovered and fired upon by the Japanese. The submarine's captain was forced to dive and leave the scouting team behind. Allison got to a rubber raft and after days adrift, reaches an island. He finds an abandoned settlement and a chapel with one occupant: Sister Angela (Deborah Kerr), a novice nun who has not yet taken her final vows. She herself has been on the island for only four days; she came with an elderly priest to evacuate another clergyman, only to find the Japanese had arrived first. The frightened natives who had brought them to the island left the pair without warning, and the priest died soon after.