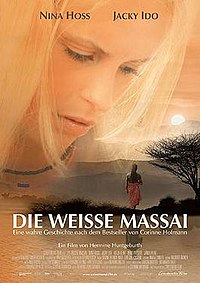 The White Masai is a 2005 film directed by Hermine Huntgeburth and starring Nina Hoss and Jacky Ido. The screenplay concerns Carola, a woman who falls in love in Kenya with Maasai Lemalian. The film is based on an autobiographical novel of the same name by the German born writer Corinne Hofmann. In the film version, names have been changed from those in the novel.

Carola (Hoss), a German woman living in Switzerland, is on holiday with her boyfriend in Kenya. She falls in love with Maasai warrior Lemalian (Ido), who is visiting dressed in the clothing of his area. At the airport on the way home she decides to stay. It turns out that Lemalian has gone to his home village in the Samburu District. Carola travels to the area, and stays at the house of another European woman. Lemalian hears about her stay and comes to meet her. Eventually they start living together.