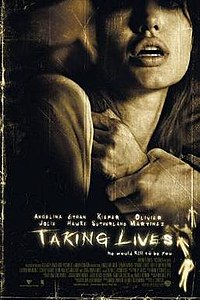 Taking Lives is a 2004 American psychological thriller film directed by D. J. Caruso and starring Angelina Jolie and Ethan Hawke, with supporting roles by Kiefer Sutherland, Olivier Martinez, Tchéky Karyo, Jean-Hugues Anglade, and Gena Rowlands. Loosely adapted from the novel of the same name by Michael Pye, the film centers on an enigmatic serial killer who takes on the identities of his victims.

In the early 1980s, teenagers Martin Asher and Matt Soulsby meet on a bus to Mont-Laurier, Quebec. The bus breaks down, and the two acquire a car, which soon blows a tire. As Matt changes the tire, Martin comments that they are about the same height, and kicks him into the path of an oncoming truck, killing Matt and the driver. Taking Matt's guitar and clothes, Martin continues on foot, singing in a voice similar to Matt's.