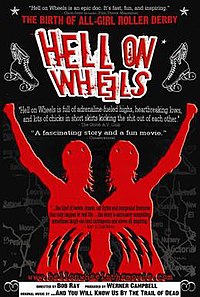 Hell on Wheels is a 2007 documentary film telling the story of a group of Texas women who band together to resurrect roller derby for the 21st century. Emerging from the Austin music and arts scene, these women create a rock-and-roll fueled version of all-girl roller derby that has spawned the derby craze that's sweeping the nation.