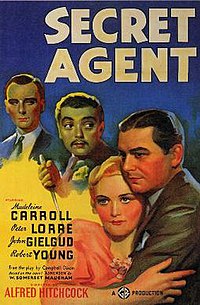 Secret Agent is a 1936 British espionage thriller film directed by Alfred Hitchcock, adapted from the play by Campbell Dixon, which in turn is loosely based on two stories in the 1927 collection Ashenden: Or the British Agent by W. Somerset Maugham. The film starred Madeleine Carroll, Peter Lorre, John Gielgud, and Robert Young. Future star Michael Redgrave made a brief, uncredited appearance; he would play the male lead in Hitchcock's The Lady Vanishes (1938). The work was also Michael Rennie's film debut (though an uncredited one).

On 10 May 1916, during World War I, British Captain and novelist Edgar Brodie (Gielgud) returns home on leave, only to discover his obituary in the newspaper. He is brought to a man identifying himself only as "R", who asks him to undertake a secret mission: to identify and eliminate a German agent on his way to Arabia to stir up trouble in the Middle East. Upon agreeing, Brodie is given a new identity (Richard Ashenden), a fake death, and the assistance of a killer known variously as "the Hairless Mexican" and "the General" (Lorre), though he's not bald, Mexican or a general.