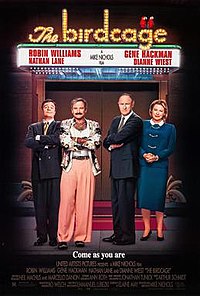 Armand Goldman is the openly-gay owner of a drag club in South Beach called The Birdcage; his life partner Albert, an effeminate and flamboyant man, plays Starina, the star attraction of the club. They live together in an apartment above The Birdcage with Agador, their flamboyant Guatemalan housekeeper who aspires to be in Albert's drag show.