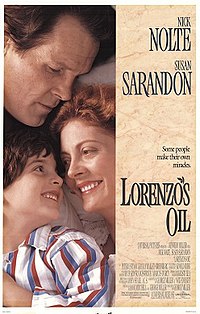 Lorenzo's Oil is a 1992 American drama film co-written and directed by George Miller. It is based on the true story of Augusto and Michaela Odone, two parents in a relentless search for a cure for their son Lorenzo's adrenoleukodystrophy (ALD). It was filmed primarily from September 1991 to February 1992 in Pittsburgh, Pennsylvania. The film had a limited release in North America on December 30, 1992, with a nationwide release two weeks later on January 15, 1993. It was generally well received by the critics and received two nominations at the 65th Academy Awards, but was a box office bomb, grossing only $7.2 million against its $30 million budget.

Lorenzo is a bright and vibrant young boy living in the Comoro Islands, as his father Augusto works for the World Bank and is stationed there. However, when his parents relocate back to the United States, he begins to show signs of neurological problems (such as falling, loss of hearing, tantrums, etc.). The boy is diagnosed as having adrenoleukodystrophy (ALD), which is fatal within two years. Failing to find a doctor capable of treating their son's rare disease Augusto and his wife, Michaela, set out on a mission to find a treatment to save their son. In their quest, the Odones clash with doctors, scientists and a support group that is skeptical that anything could be done about ALD, much less by laypeople. But they persist, setting up camp in medical libraries, reviewing animal experiments, enlisting the aid of Professor Gus Nikolais, badgering researchers, questioning top doctors all over the world and even organizing an international symposium about the disease.