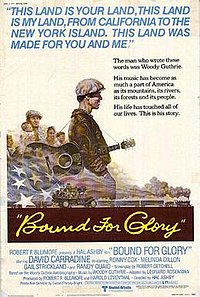 Bound for Glory is a 1976 American biographical film directed by Hal Ashby and loosely adapted by Robert Getchell from Woody Guthrie's 1943 partly fictionalized autobiography Bound for Glory. The film stars David Carradine as folk singer Woody Guthrie, with Ronny Cox, Melinda Dillon, Gail Strickland, John Lehne, Ji-Tu Cumbuka and Randy Quaid. Much of the film is based on Guthrie's attempt to humanize the desperate Okie Dust Bowl refugees in California during the Great Depression.

During the Great Depression in the 1930s, Woody Guthrie is unable to support his family as a sign painter and a local musician in Pampa, Texas, a town badly affected by the drought known as the Dust Bowl period. After hearing great things about California including from those leaving for it and being unable to find work, he joins the migration westward to supposedly greener pastures via boxcar riding and hitchhiking, leaving a note to his wife promising to send for her and their children. Woody discovers the low pay and absence of job security of California's casual labor fruit pickers and joins Ozark Bule in using music to fight for people's rights. He becomes a celebrated folk singer on radio with partners Ozark and Memphis Sue while still campaigning for his causes.