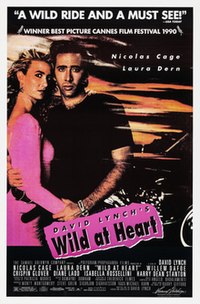 Wild at Heart is a 1990 American black comedy romantic crime film written and directed by David Lynch and starring Nicolas Cage, Laura Dern, Diane Ladd, Willem Dafoe, Harry Dean Stanton, and Isabella Rossellini. Based on the 1989 novel of the same name by Barry Gifford, it tells the story of Sailor Ripley (Cage) and Lula Pace Fortune (Dern), a young couple from Cape Fear, North Carolina, who go on the run from Lula's domineering mother and the gangsters she hires to kill Sailor.

Lovers Lula and Sailor are separated after he is jailed for killing a man who attacked him with a knife; the assailant, Bobby Ray Lemon, was hired by Lula's mother, Marietta Fortune. Upon Sailor's release, Lula picks him up outside prison, where she hands him his snakeskin jacket. They go to a hotel where she reserved a room, make love and go to see the speed metal band Powermad. At the club, Sailor gets into a fight with a man who flirts with Lula, and then leads the band in a rendition of the Elvis Presley song "Love Me". Later, back in their hotel room, after making love again, Sailor and Lula finally decide to run away to California, breaking Sailor's parole. Marietta arranges for private detective Johnnie Farragut — her on-off boyfriend — to find them and bring them back. But unbeknownst to Farragut, Marietta also hires gangster Marcello Santos to track them and kill Sailor. Santos's minions capture and kill Farragut, sending Marietta into a guilt-fueled psychosis.