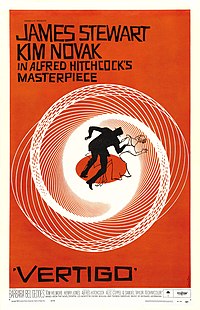 Vertigo is a 1958 American film noir psychological thriller film directed and produced by Alfred Hitchcock. The story was based on the 1954 novel D'entre les morts (From Among the Dead) by Boileau-Narcejac. The screenplay was written by Alec Coppel and Samuel A. Taylor.

After a rooftop chase, where a fellow policeman falls to his death, San Francisco detective John "Scottie" Ferguson retires due to fear of heights and vertigo. Scottie tries to conquer his fear, but his ex-fiancée and underwear designer Marjorie 'Midge' Wood says that another severe emotional shock may be the only cure.