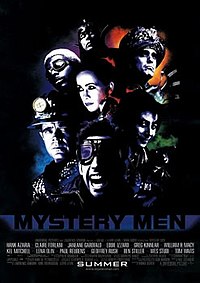 In Champion City, would-be superhero team of Mr. Furious, the Shoveler and the Blue Raja attempt to make a name for themselves, but their suspect skills make them ineffective and they are always upstaged by the city's powerful and arrogant superhero, Captain Amazing. However, Amazing’s crime fighting prowess has practically made his job obsolete. Without any worthy adversaries (most are either dead, in exile, or in jail), his corporate sponsors are beginning to pull out.