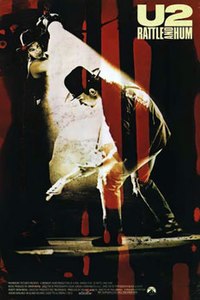 Rattle and Hum is a hybrid live/studio album by Irish rock band U2, and a companion rockumentary film directed by Phil Joanou. The album was produced by Jimmy Iovine and was released on 10 October 1988, while the film was distributed by Paramount Pictures and was released on 27 October 1988. Following the breakthrough success of the band's previous studio album, The Joshua Tree, the Rattle and Hum project captures their continued experiences with American roots music on the Joshua Tree Tour, further incorporating elements of blues rock, folk rock, and gospel music into their sound. A collection of new studio tracks, live performances, and cover songs, the project includes recordings at Sun Studio in Memphis and collaborations with Bob Dylan, B.B. King, and Harlem's New Voices of Freedom gospel choir.