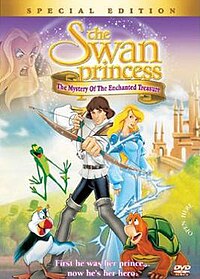 The Swan Princess: The Mystery of the Enchanted Treasure 1998

As Derek and Odette's kingdom prepares to celebrate Festival Days, the evil sorceress Zelda plots to reclaim Rothbart's notes on the Forbidden Arts; notes she helped write when she and Rothbart were partners. To discover if the notes still exist, Zelda captures a yakey-bird named Whizzer, who has the ability to imitate any voice after hearing it only once. Though Zelda's magical abilities are limited, she can create a magical fireball called a seeker to target anyone she commands it to. Threatening his life with this ability, Whizzer goes to Swan Lake Castle as a spy and overhears how Derek and Rogers discovered Rothbart's notes and had them hidden. Odette never knew Derek found the notes and always assumed if such things were discovered, the notes would be immediately destroyed. She tries to convince Derek to dispose of it saying how nothing good will ever come of them while Derek maintained his belief of someday using the notes for good.