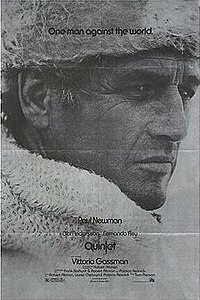 The story takes place during a new ice age. The camera tracks a blank, frozen, seemingly deserted tundra until two blurry, distant figures can just be made out. They are the seal hunter Essex (Paul Newman) and his pregnant companion, Vivia (Brigitte Fossey), the daughter of one of Essex's late hunting partners. They are traveling north, where Essex hopes to reunite with his brother, Francha (Thomas Hill).