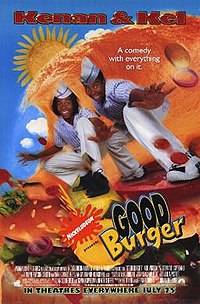 On the first day of summer, slacker high school student Dexter Reed takes his mother's car on a joyride while she is away on a business trip but is involved in a car accident with his teacher, Mr. Wheat. With no driver's license or car insurance, Dexter is in danger of going to jail, but fortunately, Mr. Wheat agrees to let him pay for the damage in exchange for not calling the police on him. With the damage estimated at $1,900, he is forced to take a summer job. After being fired from the new and soon-to-open Mondo Burger restaurant for clashing with the owner and manager, Kurt Bozwell, he ends up working for Good Burger. There, he meets and reluctantly befriends the dimwitted, absent minded and yet charming surfer dude cashier Ed alongside other colorful employees. Initially, neither of them are aware that Ed inadvertently caused Dexter's car accident. Ed had rollerbladed in front of Dexter on his way to make a delivery, causing him to swerve and crash into Mr. Wheat's car.