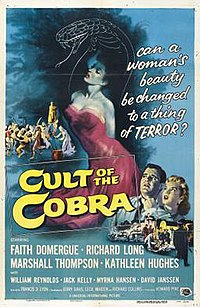 Cult of the Cobra is a 1955 American black-and-white horror film from Universal-International Pictures, produced by Howard Pine, directed by Francis D. Lyon, that stars Faith Domergue, Richard Long, Kathleen Hughes, Marshall Thompson, Jack Kelly, William Reynolds, and David Janssen. The film was released as a double feature with Revenge of the Creature.

Shortly before shipping home at the end of World War II, six American Army Air Force non-commissioned officers explore an Asian bazaar. A snake charmer, Daru, allows the men to take pictures of him holding a cobra. Paul Abel mentions the strange cult of the Lamians, who worship snakes and believe that there are people who can transform into them. Daru says quietly that, for a price, Paul can see this for himself.