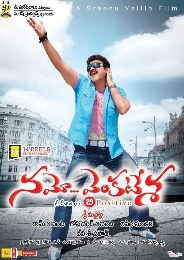 Namo Venkatesa ( Hail Venkatesa) is a 2010 Indian Telugu-language action comedy film produced by Achanta Gopichand, Achanta Ram, Anil Sunkara on 14 Reels Entertainment in association with D. Suresh Babu for Suresh Productions and written and directed by Srinu Vytla. It stars Venkatesh and Trisha in the lead roles and Brahmanandam, Mukesh Rishi, Subbaraju, Jai Akash, and Ali in supporting roles. The music was composed by Devi Sri Prasad with cinematography by Prasad Murella and editing by M. R. Varma. The film released on 14 January 2010. Although it received mixed-to-positive reviews, it was recorded as a super hit at the box office.

Venkataramana (Daggubati Venkatesh) a.k.a. Venky is a ventriloquist. He is a naive and good adult, and everyone in his association usually likes him. An astrologer named Palasa (M. S. Narayana) predicts that if he does not get married in one month, he will be a single man forever. Venky goes to Paris as part of a group to perform for NRIs, where he meets Paris Prasad (Brahmanandam) and his gang. They fool everyone and try to avoid giving them remuneration. Venky manages them and gets his and his troops' payment. Later, Venky meets Pooja (Trisha Krishnan), the niece of Prasad, and falls in love. Though Pooja has no feelings for Venky, Prasad tells him that Pooja too loves him, just for fun.